As a first-generation immigrant and political refugee from Russia, I understand the impact of federal policy on individual lives first-hand. While the transition from post-perestroika Moscow to San Francisco came with considerable challenges, my family encountered a general sentiment of acceptance and understanding.

Not only do I find the president’s travel ban troubling from a human rights perspective, I join prominent voices in the health care community to raise concerns about the impact this effort could have on access to quality health care, particularly for minority, rural and low-income Americans. The January 27 executive order prohibits people from predominantly Muslim countries from entering the country for 90 days, bans all refugees for 120 days and bans Syrian refugees indefinitely.

Foreign-born workers are integral to the US health care workforce.

International medical graduates (IMGs) represent 25.8 percent of the US physician workforce, according to Healthforce Center research. In California, the numbers are even greater: more than one-third of physicians are either citizens of another country or naturalized US citizens. IMGs are more likely to work in poor and underserved inner cities and rural communities than their US-born counterparts.

*Advanced practice nurse practitioners (APRNs) consist of nurse practitioners and nurse midwives.
Note: “US Citizens (by birth)” includes those born in Puerto Rico, Guam, the US Virgin Islands and the Northern Marianas, as well as individuals born outside the US to US citizen parents.
Source: American Community Survey (ACS) Public Use Microdata Sample (PUMS), 2011-2015 five-year estimates.

According to American Community Survey (ACS) data, more than one-third of California physicians are either citizens of another country or naturalized US citizens. The proportion of the employed workforce comprised of naturalized and foreign-citizen immigrants ranges from almost 20 percent of APRNs to more than 33 percent of physicians. 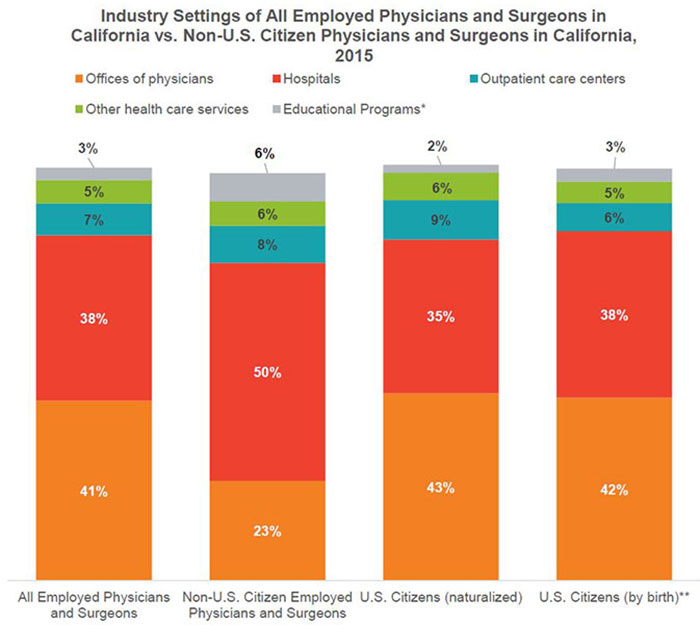 Source: American Community Survey (ACS) Public Use Microdata Sample (PUMS), 2011-2015 5-year estimates.
*"Educational Programs" consists of colleges, junior colleges, universities and professional schools.** “US Citizens (by birth)” includes those born in Puerto Rico, Guam, the US Virgin Islands and the Northern Marianas, as well as individuals born outside the US to US citizen parents.
Note: Totals may not sum to 100% since only the five most prominent industry settings are represented. This accounts for 92-95% of all providers across the four citizenship types.

Policies like the immigration ban could restrict the pipeline of health care professionals who practice in the state.

In the midst of a primary care shortage fueled by insurance expansion and an aging population, any restrictions in the IMG pipeline exacerbate an existing problem.

Of the 2,743 National Residency Match Program positions filled in 2016, slightly more than half were in primary care. US Citizen IMGs, non-US citizen IMGs and Canadian medical school graduates were more likely to be matched into primary care specialties than US medical school graduates. Physicians trained overseas represent a substantial portion of the employed workforce in California.

IMG physicians and foreign-born Physician Assistants (PAs) are more likely to practice in underserved areas than individuals trained in US schools. These individuals play essential roles in addressing a variety of California’s most pressing health care needs, such as the rural-urban provider supply gap and the continued shortage of primary care. Left undisturbed, the foreign-trained provider pipeline is likely to continue providing qualified trainees into California’s provider pool, evidenced by the large number of IMGs matched into California’s primary care residency programs in 2016.

While citizens of other countries are the most at risk of being affected by the recent ban, they are not the only ones who face challenges. Since naturalized citizens are likely to have non-US citizen family members and many of them identify with the racial/ethnic groups identified in President Trump’s executive order, factors such as the perception that the US climate is hostile to immigrants may discourage individuals from practicing medicine here. So, while no more than five percent of the existing workforce and trainee pipelines are non-US citizens, larger swaths of California’s health care professionals can be indirectly affected by anti-immigrant public policy and rhetoric.

We cannot afford to close off our doors to the world and should welcome medical professionals (and others) with open arms. Not only is it the right thing to do, but we depend on these workers to deliver high quality care to many Americans.

Igor Geyn is a research analyst with Healthforce Center. His projects focus primarily on health workforce issues in California, such as characteristics of labor supply and forecasting future demand for healthcare. He is a graduate of UC San Diego and a first-generation immigrant from Russia, having emigrated with his parents as political refugees in the 1990s.