“If there are shortages, they are regional, and they are for RNs with specific experience. We have plenty of new graduates now and projected,” said Healthforce Associate Director of Research Joanne Spetz.

According to Healthforce projections for the California Board of Registered Nursing, there will be a 4.1 percent surplus of RNs by 2035. Healthforce has projected that supply of full-time equivalent RNs will be 390,487 and demand will be 374,965 by 2035.

“This is good news for hospitals and other nurse employers,” Spetz said. “The numbers of new graduates from our RN education programs are adequate to fill vacancies created by Baby Boom nurse retirements and growth in the demand for health care services.”

However, there are notable regional differences across California. Detailed regional analyses forecast shortages for the Central Valley, Central Coast, and San Francisco Bay areas. At the same time, a surplus of RNs is projected for the Los Angeles, Sacramento, and Inland Empire regions, largely due to rapid growth in RN education programs in these areas. 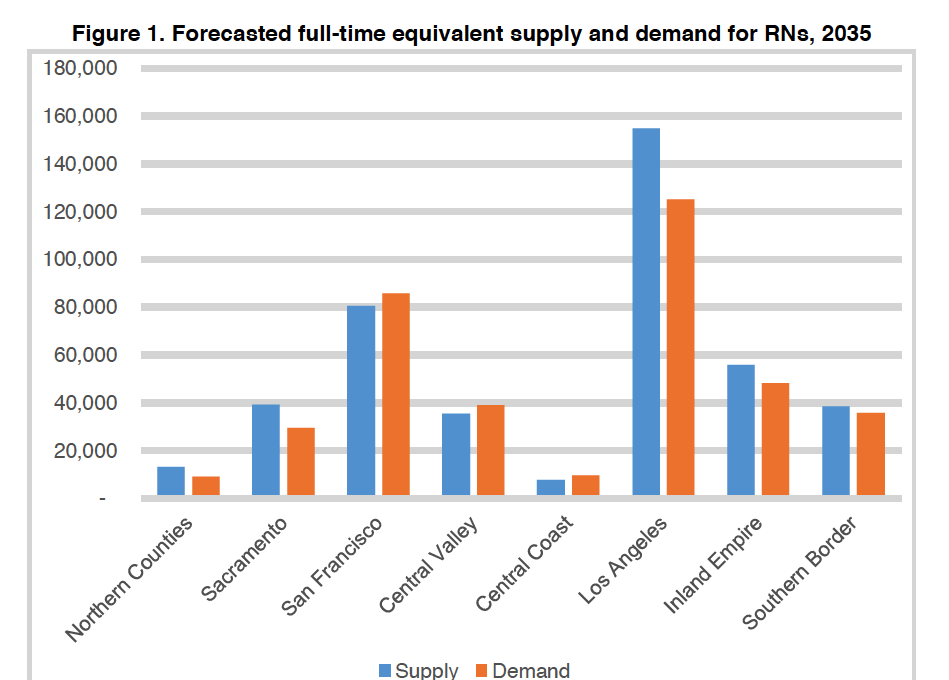 In a survey of hospital RN employers, the vast majority of chief nursing officers reported that any shortages that exist were primarily fornurses with clinical experience, particularly for the clinical areas of peri-operative care, critical care, labor & delivery, and the emergency department. Demand for experienced RNs was greatest in the Central California region and lowest in the San Francisco Bay Area. At the same time, demand for newly-graduated nurses was reported as weak, with most chief nursing officers believing there was a surplus of new graduates in their area.

“The challenge for employers is to develop succession plans," Spetz said. "Right now, they want to replace experienced nurses who are leaving positions that require clinical expertise, and they haven’t hired new graduates to prepare them for these jobs.”

Spetz recommends that employers focus on hiring well-qualified new graduates from local education programs, and then provide on-the-job training to rapidly prepare them to move into specialized departments.

“The cost of hiring a new graduate and developing their expertise is much lower than forcing our new graduates to move out of state for work and then having a true nursing shortage emerge,” Spetz said.

The mission of Healthforce Center is to equip health care organizations with the workforce knowledge and leadership skills to effect positive change. To stay up-to-date on all of Healthforce’s projections and research on the workforce, please sign up for our newsletter.
Tags:
nursing research, nursing leadership