Slow But Steady: The Growing Numbers of Men Who Choose Nursing

CHCF Health Care Leadership Program fellow Sergio Camarillo, MBA, MS, RN, decided he wanted to be a physical therapist after he learned about the profession at a career day in high school. While taking prerequisite courses for physical therapy in college, he became friends with a man who planned a career in a different health care field: Nursing.

“At the time, that struck me as odd because I saw nursing as a predominately female profession,” Camarillo said.

But, when the time came to enter a physical therapy program he ran into a roadblock: a waiting list. Camarillo’s friend convinced him to go to nursing school instead. “I was one of three men in the program at San Jose State and there were around 60 women,” Camarillo said. “It was uncomfortable at first, but as I progressed in the program I realized I had picked the right profession.”

Since then, Camarillo received two master’s degrees: in nursing and business administration. He is now director of patient care services for critical care, cardiac, emergency, trauma and the center of excellence and development for Sutter Health in Modesto.

A few years ago, Camarillo spoke to his son’s sixth grade class for a career day. “When I told them ‘I’m a nurse,’ there was a giggle in the room.” He explained to the kids that nursing is not just for women and eventually took the whole class to the hospital so they could see first-hand what nursing entails.

“Movies or media portrayals don’t do it justice,” Camarillo said. “Whenever there’s a male nurse, he is usually ridiculed or poked fun of.”

In spite of the stigma, male nurses get paid more. A recent  New York Times article cited Healthorce faculty member Ulrike’s Muench’s research, which found that male registered nurses (RNs) make more than $5,000 per year than their female counterparts across most settings, specialty areas and positions.

Healthforce Center’s recently published California Board of Registered Nursing survey found notable growth in the share of employed male RNs, from 7.4 percent in 2004 to 14.4 percent in 2008. The share has declined slightly since then; in 2016, 11.9 percent of working RNs were male, as shown in the figure below.

“Leaders of health care organizations must find a way to recruit more male nurses,” said Healthforce Center Director Sunita Mutha, MD, FACP. “Right now they are missing out on a huge pool of talent. No gender has a claim on caring.”

Healthforce Center’s survey found that men in California account for higher shares of Filipino (18.2%) and Native American (17.6%) RNs and lower shares of White (9.5%, Mixed/Other (8.8%) and Pacific Islander (9.5%) nurses. As seen in the figure below, male nurses are more racially and ethnically diverse than female nurses.  The majority of male RNs are non-White and nearly one-third of male nurses are of Filipino heritage (29.9%). 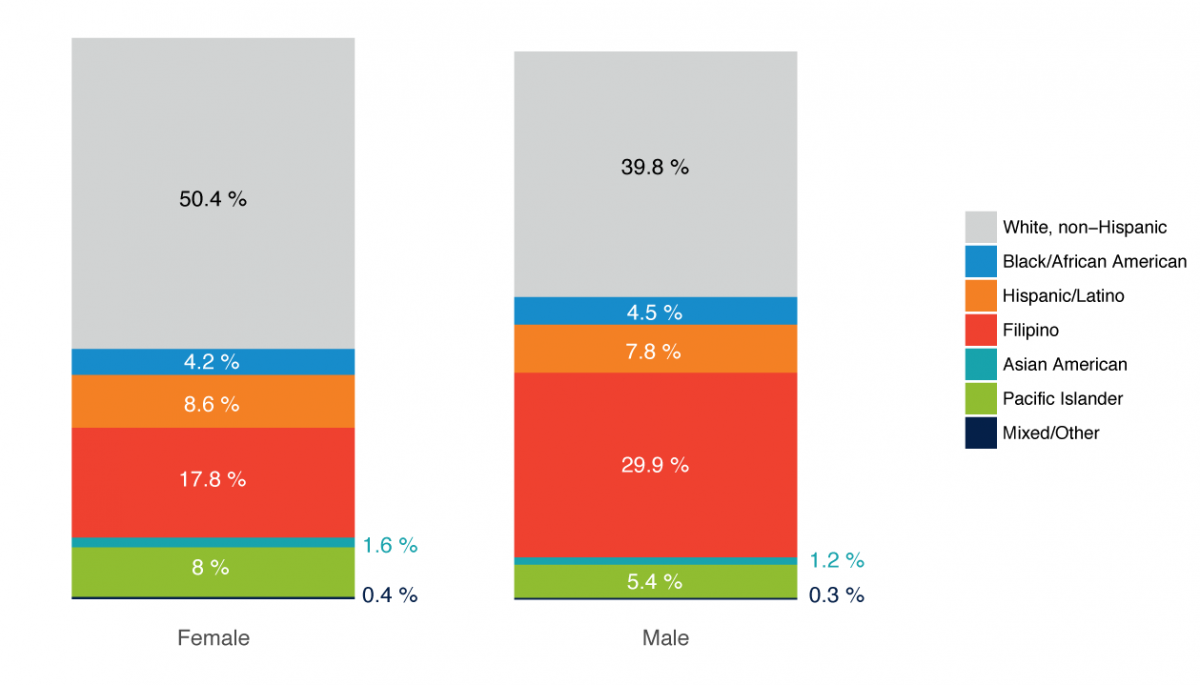 The study, which also included interviews with nurses, documented sexism in the workplace: “I frequently, at least annually, experience overt sexism by nurses, administrators, contractors, patients and family members [who feel] that men [don’t] belong in nursing. The last job I left had five cases of sex discrimination pending,” said one interviewee.

Though he has faced challenges, Camarillo's experience as a nurse has been mostly positive. As a fellow in the California Health Care Foundation Health Care Leadership Program, he brings a unique perspective to a group of clinicians with varying backgrounds including physicians, pharmacists and behavioral health specialists. “Being a nurse has given me a broader sense of purpose about what I can do for my community,” Camarillo said.