The Affordable Care Act is personal for me. As a young adult under the age of 26, ACA allows me to stay on my parents' insurance plan. Though I've been lucky to avoid costly medical treatment, the coverage has provided me with peace of mind and delivered thousands of dollars in savings.

I am not alone in a country of millions of similarly positioned young adults, individuals with conditions that would be labeled "pre-existing," and hardworking Americans for whom Medicaid coverage means not spending over half of their income on health insurance.

In fact, Republicans and Democrats in equal numbers have taken advantage of ACA provisions to obtain health insurance. And why wouldn't they, if that is the cost-effective and logical course of action?

Using data reported at the congressional district level by Charles Gaba of ACASignups.net , I tabulated the number of individuals who had obtained health insurance either through Medicaid expansion or highly subsidized coverage (HSC) plans. The findings show a clear picture—while the insurance mechanism varies (ie, Medicaid or HSC plans), the ACA-inspired increase in health coverage in red districts has been nearly identical to the increase in blue districts, just over 10 million sign-ups for both. 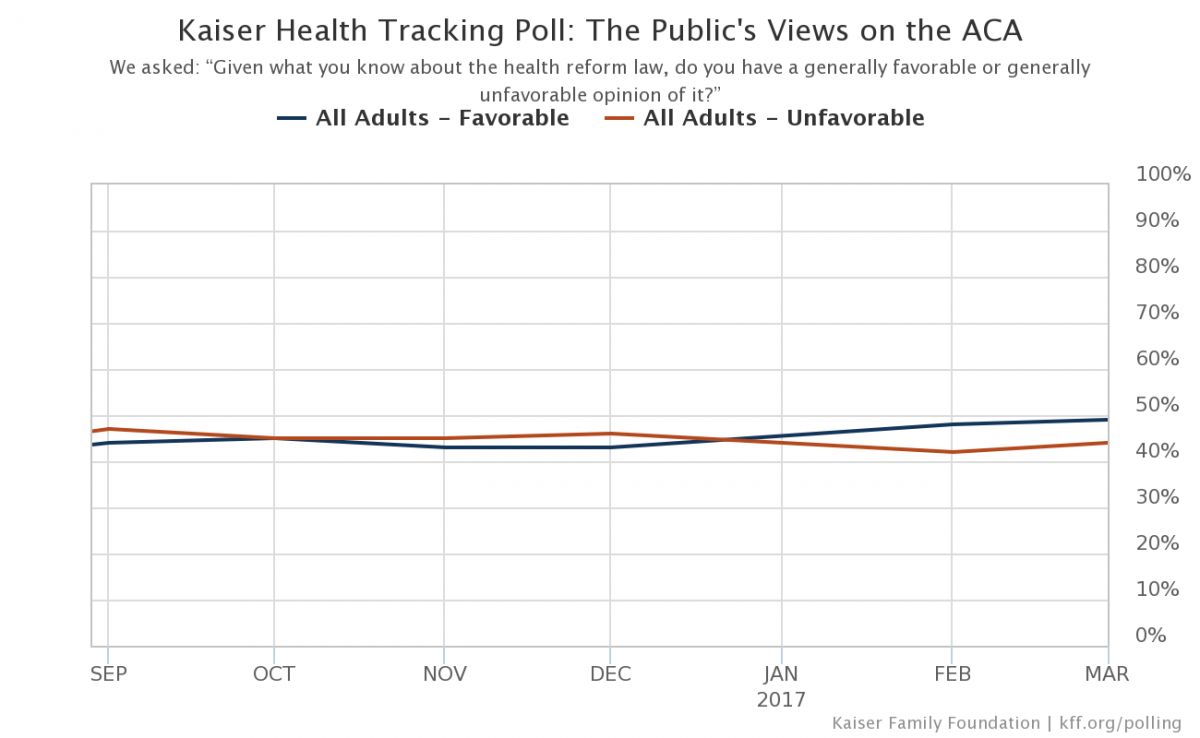 Not only is the ACA generally popular, but its popularity has risen in the months after the election. A close look at the Kaiser Family Foundation's ACA Tracking Poll illustrates this very clearly—as of February 2017, the share of Americans indicating a favorable view of the health law (48%) is at its highest point since July 2010, and has climbed from 43% since November 2016. In fact, this is the first time Americans have had a net favorable view of the ACA since August 2015.

Looking at these figures by group yields an interesting picture of what is happening. Like the nation as a whole, the share of Republicans with a favorable view of the bill is at its highest point in years. Racial identity may also explain some of the difference in support for Obamacare—black and Latino respondents were more likely to be in favor of ACA than whites, according to the KFF Tracking Poll. Knowing that all policy (and, by extension, all policy reform) has pros and cons, it is important to note exactly who those winners and losers might be.

More anecdotally (yet more vividly) illustrative of the rise of Obamacare's popularity over the past seven years are the post-election town halls that sprang up across the US. In red and blue states alike, citizens rushed to voice their concern about ACA repeal. Citing a spectrum of benefits ranging from affordability to coverage of previously excluded medical conditions, these individuals provided a powerful example of how many have benefited. While not every American is a die-hard ACA booster, the law's benefits have been allocated across a surprisingly diverse swath of the country.

I earnestly hope the President and Congress will realize the very real impact ACA repeal would have on millions of Republicans and Democrats alike, just like their constituents already have.

Because, at the end of the day, health care is not a partisan issue—it is a human right.

Sign up to get updates on health workforce research insights, trends and leadership opportunities.

Igor Geyn is a research analyst with Healthforce Center. His projects focus primarily on health workforce issues in California, such as characteristics of labor supply and forecasting future demand for healthcare.